Skip to content
So, I was at Wal-Mart a couple of days ago. The dreaded Wal-Mart. I was in a pretty good mood, because it was the first full day of my spring break (aww, yeahhh!), but still… Nobody actually likes going there, do they? I’d put off grocery shopping for a few weeks, though, and we were going to be stuck with nothing but PB&J sandwiches again, so I had to do it. Anyway, so I was kind of dreading it, but I figured I’d get it out of the way and enjoy the rest of my day.
I had just walked in and was heading to pick up some basic toiletries. Coming towards me from the other direction was a mom and her two teenage kids. The boy, maybe fifteen or sixteen, was bouncing one of those rubber (I think?) balls he’d picked off a shelf. It was about the size of a kickball and was pink, with Minnie Mouse plastered all over it. I didn’t think much of it. As we passed each other, I was consulting my list, and he, without making eye contact or even acknowledging me, slowly placed the ball in my empty cart and kept walking. I’m sure I had a really confused look on my face, and I shook my head. I went to put the ball on the nearest toy shelf and then laughed out loud. It was so absurd. I turned around and looked back at the boy as he was walking away and he had a mischievous, ear-to-ear grin on his face. I returned his smile and went on with my shopping. Later on, I ran into him again with a full cart, and he asked me where the ball was, feigning disappointment when I told him I put it away.
It was such a simple, silly moment, but it completely made my day. He took a risk. He didn’t know if he’d annoy me or upset me, but he acted on a random impulse, and it turned out to be a funny moment. It really made me think about interacting with others. Sometimes, I will make a point to smile at others. Other times, I’m completely guilty of going out and never even making eye contact with the strangers around me. In fact, more often than not, I’m annoyed. This guy is blocking the entire aisle. I wish this lady would control her wild kids. Why are there only two registers open? I know that’s a normal thought process, but I’d like to improve it. I know I come out in a better mood when I’ve made a conscious effort to go out of my way to be polite, to smile, to interact instead of making a mad dash to get in and out. I am a little old-fashioned sometimes, but I think I’d love it if it weren’t out of the ordinary to stop and have a conversation with somebody you don’t know. So, a new goal of mine: Be more engaging. It’s a step towards really and truly caring for others. I hope you’ll think about it, too. I have a feeling it’s not going to take a whole lot of extra effort, but I think it will be pretty rewarding.
Shout-out to the random kid in Wal-Mart who made my day. Also, my brief period of enlightenment came crashing back down to reality once I checked out with all of this (I even had to put things on that little, unstable-looking shelf at the bottom of the cart) and spent a million dollars. 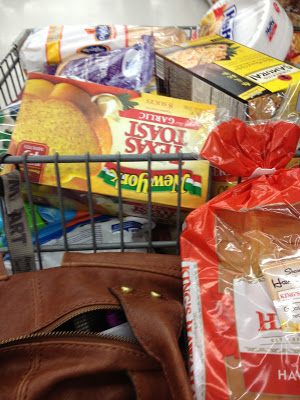 Hope you guys are having a wonderful week, and that you don’t have to go to Wal-Mart. But if you do, remember to smile at somebody! 🙂
Love, Bekah